Alaska that never was: Seward's Success

Today, in Alaska, there is much debate over building a bridge over Knik Arm from Anchorage to the largely undeveloped Point MacKenzie.  This infamous "Bridge to Nowhere" has garnered national attention for being an example of government waste.  Today, there is very little around Point MacKenzie.  Supporters of the bridge say that this will change with a bridge, which will allow development that will pay for itself.  While the ultimate outcome of the Knik Bridge argument is uncertain, it is interesting to note an idea that sprung from Alaska's early oil days 4 decades ago in the same spot.  This was Seward's Success. 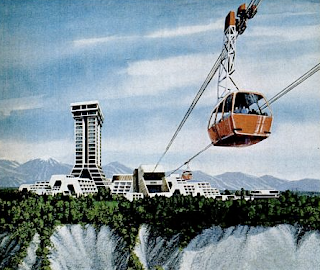 Artist rendering of Seward's Success from Popular Science
Seward's Success was the ultimate futurist idea.  A city of 40,000 located at Point MacKenzie in a glass, climate controlled structure.  Touted as the world's first enclosed city, it was a dream thought up during the rush of money expected from the discovery of oil in Prudhoe Bay in 1968.  The idea was developed by Tandy Industries of Tulsa, with designers from Los Angeles.  Seward's Success would feature offices, shops and restaurants, an indoor sports arena, and housing units.  The temperature would be kept at 68 degrees all year round, with natural gas providing the power supply. 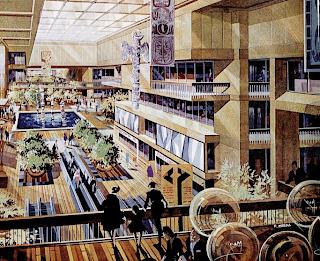 Artist rendering of housing units (left) and the monorail (right)
So why is there no futuristic city at Point MacKenzie.  Ultimately, the idea was short lived.  In the early 1970s, the building of the Trans-Alaska Pipeline was held up in court.  With the expected onrush of people and dollars held up, the subcontractor could not make the payment on the lease.  And the dream of a glass city across from Anchorage fell away.  In all likelihood, the city would have been a failure.  Alaskans (or anyone else) would probably not go for living in what would basically be a gigantic shopping mall.  Seward's Success stands out as a social experiment that would have likely failed.  Still, it is fun to sit look northwest from downtown Anchorage across the two mile strait and wonder. 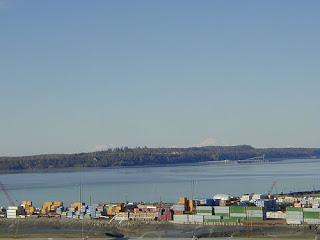 The Port of Anchorage in the foreground, with Point MacKenzie across Knik Arm
Posted by AlaskanYore at 3:29 PM